When performing Penetration tests, one of the first things you do (if in scope) is reconnaissance. Now that could be for target machines if it is a black-box test or usernames (users) if trying to perform log-in attempts.

A few ways of obtaining usernames might be to enumerate Active Directory either through null sessions or authentication, perhaps scraping them from RDP sessions that display the current/last logged in user or maybe using SNMP default strings to enumerate services and associated user etc..
But, what if you cant do any of them, maybe they get Pentested annually or just have a decent IT team then what are you going to do.

Well, this is where something prompted an idea to create a list of commonly used usernames across various companies or councils etc.. I often find that there are common users or default/generic users that are often used no matter where i go. The passwords aren’t always the same (unfortunately for us) but, with generic and default user names come generic and default passwords (typically). So over time i have slowly been putting together a list of common users and as of late imported a few from similar style lists off the internet.

I think twice, tree times tops in the past few years, my list has gained me a foothold onto a network that i would have not got on before due to not having anything to go on.

Using Hydra or Medusa (take your pick), although Hydra has always been tops for me especially with the new update, then you can perform a password attack, staying withing the password lockout policy if you know it, else try stay under 3 attempts just to be on the safe side, using something like the good old “Password1″,  “company_name1″, “(blank)” or “same user as pass”. This actually got me a hit or two. Granted this was only about 3 times in the past few years but if your in a bit of a bind its always worth a member.

The link below is to my list as it stands so far, i am hoping to keep updating this as i go.

If you have any common users you know of that are worth adding to the list that aren’t already there please send them to me. Sharing is caring!

Popular posts from this blog 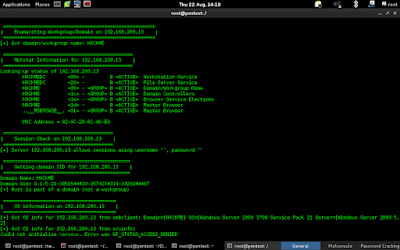 Today we are going to discuss Null Session enumeration, specifically against a Windows Domain Controller.

Null session attacks have been around a long time. Probably back since Windows 2000. Yet it is something that System Administrators often neglect to consider when hardening their domain and network. This can lead to disastrous results as enumeration of a null session can divulge just about every bit of useful information an attacker needs to remotely gain access to a system. Many people consider this an old technique, hell, many Pentesters and companies don’t even check for this. However, this is one of the very first checks i do when performing a Penetration test and providing they haven’t had previous Pentests that have found this and they have remediated against, then i can safely say i find this on nearly every test.

So what exactly is Null Session Authentication?


Well, to put it very briefly, it’s how Windows represents an anonymous user. A remote session is create…
Read more

By Unknown - September 07, 2015
Description The version of Windows running on the remote host is affected a vulnerability in the HTTP protocol stack (HTTP.sys) due to improperly parsing crafted HTTP requests. A remote attacker can exploit this to execute arbitrary code with System privileges.
Solution Microsoft has released a set of patches for Windows 7, 2008 R2, 8, 8.1, 2012, and 2012 R2
See Also https://technet.microsoft.com/en-us/library/security/MS15-034

This Microsoft vulnerability MS15-034 can affect Windows 7, Windows Server 2008 R2, Windows 8, Windows Server 2012, Windows 8.1, and Windows Server 2012 R2., running HTTP.sys which is used by any version of IIS running on one of these operating systems. HTTP.sys was introduced with IIS 6.
This vulnerability is in the HTTP protocol stack (HTTP.sys) due to improperly parsing crafted HTTP requests. A remote attacker can exploit this to execute arbitrary code with System privileges, alternatively, and most frequently executed, is a Denial of Service (DoS) due to the i…
Read more

To many, this method of gaining access is almost like cheating when on a customers site performing a penetration test.
It is a quick and dirty way to get users passwords without having to login to anyone else’s computer.
Simply sit down, plug in and your ready to go.
Netbios spoofing relies on a windows machine following the below process to resolve DNS queries:

Windows first looks in its local hosts fileIt will then check its own DNS cache to see it has been recently resolved.If this fails, it will send a request over to its configured DNS server(s).If the DNS server cannot resolve it (and assuming the name is in the non-standard DNS format) the client will send the request to its configured WINS server (if specified).If at this point the client has still not received a reply, it will send out a series of NetBIOS broadcasts.Finally, if all else fails, it will look inside its LMHOSTS file
You can see from the list that our attack doesn’t come into play until the 5th stage. You may …
Read more